While traveling through Europe one cannot fail to notice the many bronze sculptures of important historical figures of worldwide fame. Be it authors, scientists or artists.

Here in our town Takahagi are two men who ought to have sculptures of their own:  Sekisui Nagakubo and Shinzô Natsumura. But both of them are standing in the shadows of Tadataka Inô and Tomitarô Makino and are therefore not only unknown to the world, but even in Japan almost nobody knows of them. There are no sculptures that parents can point their fingers at to tell their children about those two men.

In recent years though, thanks to the research of Professor Akira Baba of the University of Tokyo, light is shed on both of them and it is becoming clear that they are held in high regard overseas, even more so than in Japan herself. Due to their pioneering achievements, which surpass the works of Tadataka Inô, they are now suddenly standing in the spotlight.

Maybe it was because of the 2011 Tôhoku earthquake and tsunami, but the following year on April 4th a committee (headed by Toshio Minagawa) was formed to erect a statue of Sekisui. 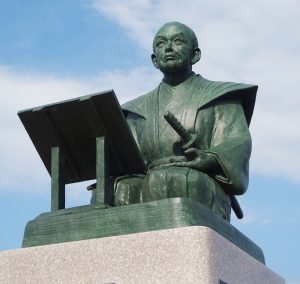 A bronze statue of Sekisui Nagakubo in front of Takahagi station

Despite concerned voices, Sekisui who himself overcame great obstacles in his lifetime, would become a symbol of restoration and revival. With “The Memorial Society of Nagakubo Sekisui” at its center and the support from people from in and out of the City, the day to celebrate the completion of Sekisui’s bronze sculpture came quickly with the Culture Day of 2012.

The creator of the sculpture, Seiji Nôjima, member of the Japanese Art Academy, said: “The expression of art is born from emotions. This sculpture stands in front of Takahagi station as a symbol of hope for the Japanese citizens and as an expression of respect and gratitude.”

Sekisui was born in the village of Akabama in the Hitachi prefecture (today’s Ibaraki). From the north to the south the important “Ôshû –dô” road passed through this region which at the time was part of the Mito Domain. During the time from “year five of Meiji April the 29th to the year 18 of Meiji the highway was called ‘Rikuzen-hama kaidô’” (Kômyô Nagakubo: chizushi tsûron).

Nowadays the National Highway, JR tracks and the Jôban Expressway run alongside the road.

During the Edo period there was only the “Ôshû-dô”, so one can only guess how crowded and lively it must have been.

But even though it lay next to a kaidô (road dating back to the Edo period leading to Tokyo) Akabama wasn’t anything more than a village consisting of around 30 houses or so. The village was separated into the parts: south, central, down and kanaba.

Sekisui’s birth house lay on the west side of a street in the central part of the village, next to a spring and protected from the northwest winds by mount Sedo. Back in these days there where wooden backdoors and in the evening one could hear them closing with a scratching sound. For generations his family was fulfilling the role of the “shôya” (government officials of a village in charge of various tasks as such as collecting taxes and delivering governmental orders). 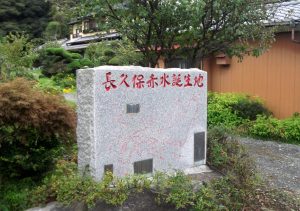 Place of birth of Sekisui Nagakubo

“If my wife, so far away, only was in taka, even if I don’t know the way, I surely would have looked for her at the beaches of tezuna” (“beaches of tezuna“ refers to the coast of Akabama).

It is one of Japans first class beaches.

It must have been at the time when Sekisui was seven years old that such episodes occurred, as a Samurai, staying for a night, gave him a “college” lecture and praised him. Or the episode during obon when Sekisui learned characters by writing them into the sand.

Sekisui’s gravestone stands in Akabama on the sands of a pine tree wood nearby Kitahara.  His parents were originally buried at the family grave of their forefathers by mount Matsutsuka, but after the lineage split and the distance between the graves was rather far, the 60th anniversary of his birthmother’s death was taken as an opportunity to relocate the graves.

Sekisui’s gravestone is facing to the west and to the south of it there stand the gravestones of his father, birthmother and stepmother next to each other. The engraving on the stone of Sekisui’s birthmother was written by himself while that on his stepmother’s stone was done by Nankei Nagoya.

The engraving on Sekisui’s gravestone was done by Yorihira Matsuda, lord of the Shishido domain and himself brother to the 6th lord of the Mito domain. Considering the date, year 11 of Kansei (1799) May 8, Sekisui had it written at the age of 83, two years before his death. 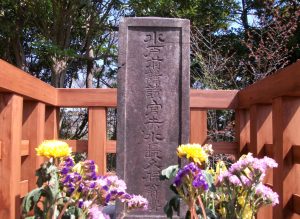 On the front, written in elegant characters, it reads: “Gravestone of the honorable Sekisui Nagakubo. Former servant of the Mito”. On the other three sides written tightly in kanbun it says:

“The name is Harutaka, written Shigyô, gone by the name of Sekisui, called Gengobei. Long ago he left Ôtomoshi [a daimyô from Kyûshû] was given the castle of Nagakubo in Suruga [in today’s Shizuoka prefecture] and then came to us”

“Born in the country side, exerted oneself without rest, saw observed and learned, a position fitting for such a person”

It is said that 23 years old Shôin Yoshida has visited the grave.