Sekisui is a prime example of a person who made the very best out of bad circumstances. His map of Japan which was published in Ôsaka half a century before the map of Tadataka Inô and helped to bring a map of such kind to the masses was revolutionary. Especially if it is taken into consideration that he didn’t really measure the country by himself but gathered information after information, corrected them, scaled the whole thing down, named 5952 places along important roads, colored everything and created the first map in Japan, which encompassed longitudes and latitudes.  This map is the so called “kaisei nihon yochi rotei zenzu”, the “Revised map of the whole of Japan”, published in 1780 (year 9 of Anei) with the official recognition by the Mito domain. It would be an understatement to say that the map was just regularly used by the common folk, it was something that was absolutely essential to leaders during the tumultuous times at the end of the Edo period. 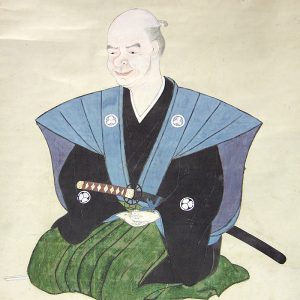 Sekisui was born in the middle of the Edo period, November 11th 1717 (year 2 of Kyôhô) two years into the Kyôhô reforms, in Akabama village which lay right next to the “ôshû-dô” road located inside Mito domain territory. His family originally fulfilled the role of the “shôya” for generations but because his father was a second born he set up a branch family in a pine wood in Kitahara, a part of the same village. After that, a wave of misfortune rolled over his family. His younger brother, mother and father all died and he became an orphan at the age of 11. The love and understanding of his stepmother was to become his salvation. In addition there was Genjun Suzuki, a doctor in a neighboring village, who was very passionate about teaching his students at his school. Sekisui probably made good friends there.

What is commonly known as the “sekisuizu”, or “Sekisui’s map”, is the “kaisei nihon yochi rotei zenzu” (Revised map of the whole of Japan) published in 1780 when Sekisui was 64 years old. Using the input he received from Juan Kawamura, Koshôken Furukawa and others Sekisuis released a corrected second version at the age of 75 in 1791 (year 3 of Kansei).

The map’s foreword states that it was made after 20 years of study and research. That is the same foreword as in the “shinkoku nihon yochi rotei zenzu” (New map of the whole of Japan) prior to the “revised” map of March 1775 (year 4 of Anei).

There exists a version even prior to the “shinkoku”, or “new” one. In chronological order it looks like the following. 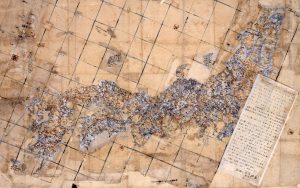 After Sekisui’s death there were five more versions as well as several illegal copies and imitations. The most attention should be given to the introduction of the map to countries overseas.

The reason why 110 years after his death Sekisui was awarded the rank of “jûshii” was his accomplishment of writing the geographic portion of the “dainihonshi”, the Great History of Japan. It wasn’t for his “sekisuizu” which was of such great use during this most important period of time. So why was that? It was because scholars of the Meiji government looked at everything from a western point of view and didn’t deem it to be a map. 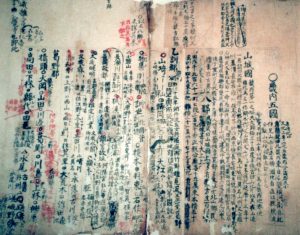 Sekisui wrote how much he loved travelling and that map making was more like a hobby to him. That’s why when asked what his principle occupation was, he would have answered “Jugakusha”. However, he didn’t strive to become just like any other scholar, who was only good at writing poems in pretty letters. In other words, from young age, somewhere in his heart his real dream was to be part of the very important military and political circles, to stand inside the tent on the battlefield where important decisions were made. But his status was nothing more than that of a farmer. A status which was, at the time, comparable to an insect. Nevertheless at the age of 44 in his work “tôoku kikô tsuketari hokuetsu shichikiki” he stated his opinions on the course of politics. He used Mitsukuni’s policy of the promotion of science as a springboard and even though he encountered a lot of obstacles on his way up he actually managed to reach a position at the top of the Mito domain.